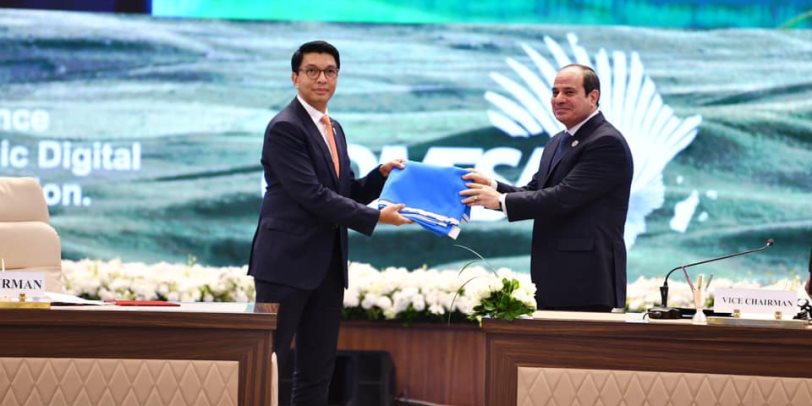 Egypt’s President Abdel Fattah Al-Sisi assumed the chairmanship of the 21st Summit of Common Market for Eastern and Southern Africa (COMESA) Heads of State and Government, which kicked off earlier today at the New Administrative Capital (NAC).

Al-Sisi said that, during his time as chairman, Egypt aims to achieve regional integration by developing intra-regional trade, as well as leveraging the African Continental Free Trade Area (AfCFTA), emphasizing the necessity of introducing exemptions to customs as agreed within AfCFTA’s framework.

Signed in March 2018, the AfCFTA agreement came into effect in January 2021, creating the world’s largest free-trade area and the 8th largest economic bloc in the world.

It has a combined GDP of $3 trillion that is expected to more than double by 2050, according to the African Union (AU), with 39 out of 55 members of the AU ratifying the agreement in the aim of accelerating intra-African trade and boosting Africa’s trading position in the global market.

He also highlighted his proposal to set up a mechanism to review the trade policies of member states on a periodic basis to ensure the effective implementation of customs privileges.

The president asserted that the bloc should develop policies and adopt action plans that facilitates and encourages state and private sector integration that will contribute to stimulating local and regional demand.

Al-Sisi assumed chairmanship of COMESA from President of Madagascar Andry Rajoelina during the opening session of the summit.

El Sisi proposed an initiative to achieve industrial integration among COMESA member states, asking them to work together on drafting an executive plan to accomplish it, he also pledged cooperation with COMESA countries in the energy sector pic.twitter.com/Z8TloRW1fp

Egypt will do what it takes during its tenure at the helm of the African bloc to build on what has been achieved in the last period, and realize the aspirations of the member states, he added.

In his speech, Al-Sisi said that the global and regional economy has witnessed many developments since the last COMESA summit in July 2018, adding that progress made in terms of continental economic integration has been accompanied by many challenges due to pandemic.

He also expressed his confidence that the 21st COMESA Summit will introduce constructive recommendations to serve regional economic integration, wishing success for all participating delegations.

Egypt is assuming the presidency of the summit for the first time since 2001.