“Although uncertainty remains high,” BNP Paribas expects a significant rebound in Egypt’s economic growth of 5.3 percent for the next fiscal year (FY) of 2021/2022.

Led by construction sector and consumer spending, the increase in growth will also be supported by the draft planning budget to boost domestic demand, an uptick in gas production and the tourism sectors gradual recovery, wrote BNP’s Q2 Egypt report.

They also noted that the first 3 quarters of 2020 saw positive real GDP growth of 1.3 percent Y-o-Y on average, thanks mainly to domestic consumption, with construction, real estate and retail sectors driving growth keeping growth “positive throughout the fiscal year 2020/21, at 3.1 percent, although this will be lower than the 3.8 percent reported for 2019/20, due mainly to the fall in tourist frequentation”.

“The situation of public finance should continue to improve even if debt service remains a strong constraint,” the report wrote, adding that debt service saw a small drop due to the easing of interest rates on total central government debt. This was recorded at 10.9 percent for 2019-2020, compared to 11.4 percent in 2019.

BNP expects government debt to remain high over the medium term, expecting it to rise to 94 percent of Egypt’s GDP by the end of the current FY in June, before returning to 89 percent of GDP in 2023/2024.

Fiscal policy has focused on supporting consumer purchasing power, particularly for civil servants and the poorest groups in society, and increasing health spending, it added, stating that the increase in receipts will allow a continued improvement in the public finances in 2020/21, despite the cost of measures to support the economy. 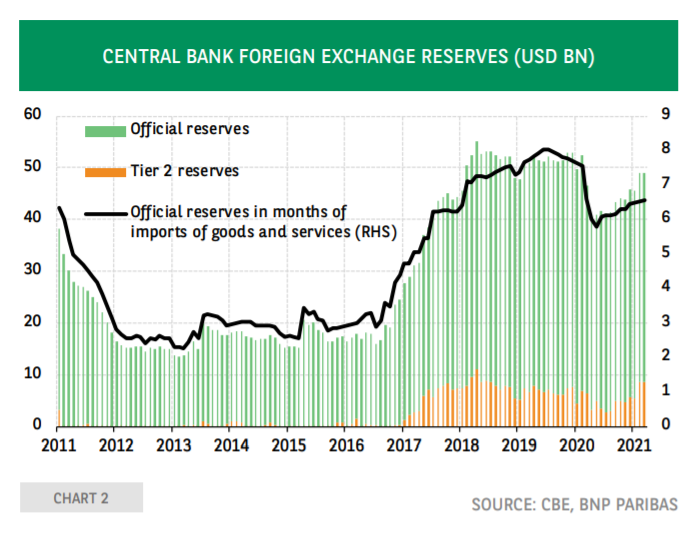 The first half of 2020/2021 saw receipts climb 16 percent, attributed to “an exceptional tax on the highest incomes,” with spending increasing by 9.6 percent.

“The government is again likely to generate a primary surplus (equivalent to around 1.6 percent of GDP) and the budget deficit will be reduced to 7.2 percent of GDP. However, while debt servicing costs are falling in value terms, they remain very high as a percentage of government revenue (48 percent in 2019/20), limiting fiscal flexibility,” BNP stated.