96% of ME trade companies to reconfigure supply chains within 7.4 months

In the Middle East, big data and analytics were believed by 56% to have a positive impact on their ability to trade across borders in the next 3-5 years With the on-going COVID-19 pandemic continuing to affect international trade, 96 percent of Middle Eastern (ME) companies are in the process of reconfiguring their supply chains to be a step ahead of future outcomes, states a 2021 global study of private sector perspectives.

Commissioned by DP World and conducted by The Economist Intelligence Unit, released earlier this year, the report notes that 38 percent of Middle Eastern companies have actually managed to expand international sales during the pandemic, with 32 percent of African companies doing the same.

Supply chain reconfiguration has become a priority for businesses in order to avoid current and possible future repercussions of the pandemic, said the report. Globally, 83 percent of companies are reconfiguring their supply chains.

From a regional perspective, 96 percent of ME companies were in the process of reconfiguring their supply chains, giving the region the highest share of respondents.

When it comes to Africa, 84 percent of African businesses surveyed noted that they too are in the middle of upgrading their supply chains.

Companies in the Middle East expect to restructure their supply chains within 7.4 months, compared with 8.6 months in Africa and 8.5 months globally. 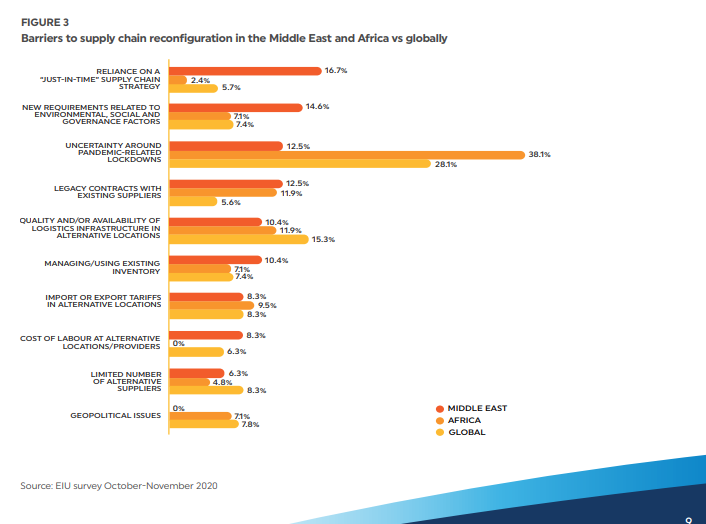 On average, companies allocated 32 percent of revenue from H1 of 2020 to help them switch suppliers or logistics providers and change production or purchasing locations.

Demand shock, defined as difficulty in selling products to customers in international markets, had 48 percent of ME respondents reporting it as having the most impact on international sales.

Logistics shock was seen as Africa’s biggest challenge during the pandemic, with 48 percent indicating that difficulty in arranging for transport or logistics services, had the greatest negative impact.

Sultan Ahmed Bin Sulayem, CEO and Chairman of DP World, said “The impact of the COVID-19 pandemic has redefined how the world stays connected, and companies conduct business.  Moments of crisis have historically served as a powerful impetus for innovation. The effects of the pandemic have accelerated the transformation of the supply chains and prompted rapid adaptation to ensure resiliency in international trade. The global business community has risen to the challenge and taken strong and decisive action to make supply chains more robust and agile – the benefits of which will be reaped in future years.”

The report also revealed the particular sectors that helped to support international trade during the pandemic. Supported by data from the ITC, South African exports of pulp (the raw material for toilet paper) increased 163 percent.

African companies may find opportunities for supplier diversification within the region since the new trade agreement, the African Continental Free Trade Agreement (AfCFTA), came into force earlier this year. 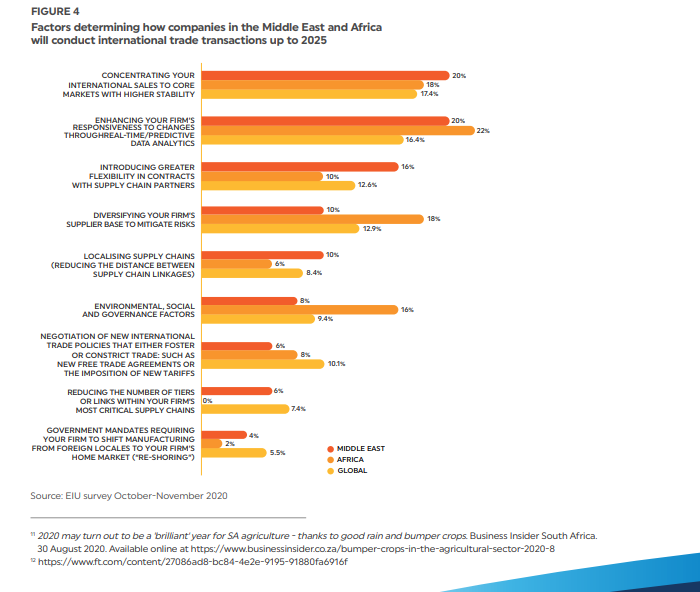 When it comes to the Middle East, big data and analytics were believed by 56 percent to have a significant positive impact on their ability to trade across borders in the next three to five years.

An additional 43 percent believe IOT will have a similar impact and 32 percent report that both block-chain and cloud will have an impact.

One in six respondents, or 16 percent, in the global survey said enhancing their firm’s responsiveness to changes through real-time/predictive data analytics would be the most important factor determining how their company will be conducting international trade transactions in the future.

For African companies, enhancing their firms’ responsiveness to changes through real-time/predictive data analysis was the top factor that will determine their approach to international trade transactions up to 2025.