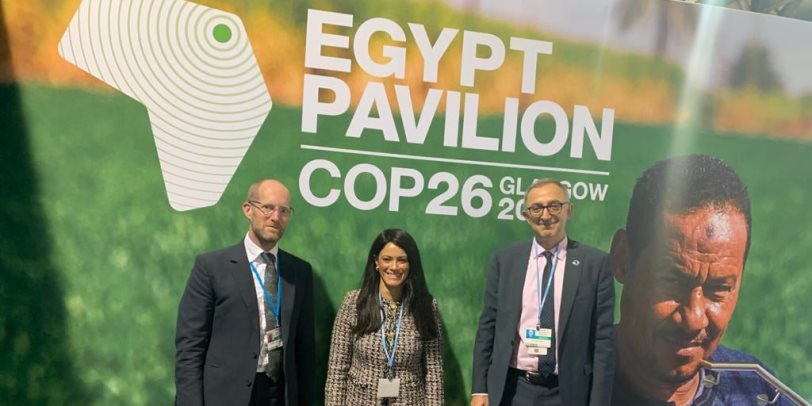 Part of the minister’s participation in the United Nations Climate Change Conference (COP26) at Glasgow, Al Mashat’s meeting comes within her ministry’s framework of extensive communication and consistent coordination with bilateral and multilateral development partners to further Egypt’s development.

Al Mashat referred to preparations for the new Country Strategy 2022/2027, highlighting that progress has been taken towards the final approval of the strategy which reflects the deep cooperation between Egypt and the EBRD, and highlights the bank’s role as one of Egypt’s key partners in supporting the country’s efforts to achieve its development agenda.

Egypt currently aims to increase the total number of green projects implemented by Egypt, with Minister of Planning and Economic Development Hala El-Said stating that the number will jump to around 50/60% of all planned investments by FY 2024/2025.

Al Mashat also stated that the new 5-year Country Strategy with EBRD focuses on 3 pillars; creating a more inclusive economy for the business environment, youth and women; accelerating the pace towards green economy, and to enhance competitiveness through boosting growth rates and enhancing the private sector’s role in development.

Through its new strategy, the EBRD has set an ambitious target for the green share of its investment to reach more than 50% by 2025, in order to reduce carbon emissions in its countries of operations by 25-40 tons, during the strategy’s period. The new EBRD strategy also focuses on 3 pillars; transformation to green economies and towards environmental sustainability; gender equality; advancing digitalization for digital transformation.

Since 2012, the Egypt-EBRD cooperation portfolio includes 134 project in both Egypt’s public and private sector, with the EBRD investing over €7.4 billion of which 75% were distributed to the private sector.

The meeting was also within the framework of Egypt’s preparations to host the next edition of the UN Climate Change Conference next year in Sharm El Sheikh.