Sharing her own experiences, Al-Mashat stated that she was the youngest economist to join the International Monetary Fund (IMF) 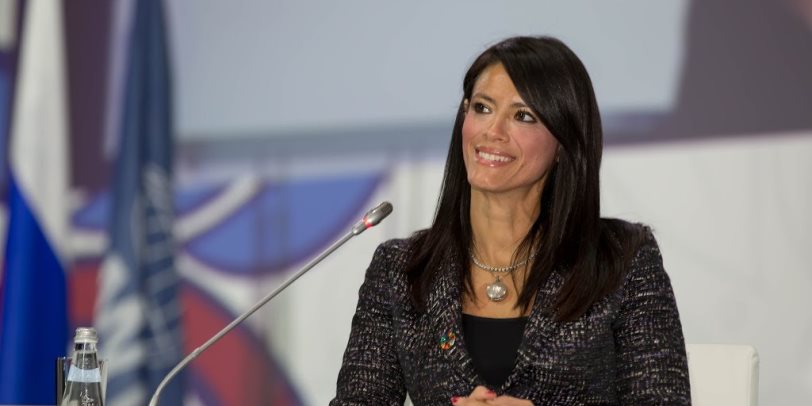 “The biggest challenge for any policymaker in today’s world is how quickly environments change; we are constantly tested and pushed outside our comfort zone which necessitates that we remain vigilant and innovative in face of the constant change,” said Minister of International Cooperation, Rania Al-Mashat.

“I was raised to be gender blind. The dilemma is not about being a woman or a man, it’s about who can do it better and strive for more. Everyone can succeed…” Al-Mashat stated during J.P. Morgan’s “Women in Leadership Engagement Session” on March 29.

The minister spoke on her own personal career and the importance of the economic inclusion of women in a session moderated by Alison Livesey, Managing Director, Wholesale Payments: Global Market Management, Business Transformation and Strategic Execution, Western European Country Head, at J.P. Morgan.

“We just have to believe in ourselves and work on developing our skills set in order to be the best in what we wish to pursue,”Al-Mashat continued.

The former minister of tourism said that there are 4C’s she believes in wholeheartedly.

These are competence, connections, confidence, and charm.  By leading with passion and dedication, and by inspiring people to think innovatively, the 4C’s lie at the heart of personal and professional progress, she added.

A major advocate for women’s inclusion in the economy, Al-Mashat is a main figure head when it comes to pushing for gender parity.

Despite that COVID-19 had significant social, economic, physical and health impacts globally that led to a widened gender gap amidst vulnerable groups in societies, gender equality is a necessity for any country to realize its full economic potential, the minister highlighted.

For the first time in history, 25 percent of the Egyptian Parliament seats are allocated to women, and there are 8 crucial ministries led by women in the Egyptian cabinet. Al-Mashat explained that there is a strong political will in Egypt to fulfill women’s constitutional rights and empower them economically.

Sharing her own experiences, Al-Mashat stated that she was the youngest economist to join the International Monetary Fund (IMF), before being called by the Central Bank of Egypt to help in modernizing and introducing frameworks of monetary policy for 11 years as sub-governor.

In 2014, the Egyptian Constitution established values of justice and equality that guarantee the rights of women in all aspects of life; and in 2017, the National Strategy for the Empowerment of Egyptian Women 2030 was adopted by the President of Egypt Abdel Fattah Al-Sisi making Egypt the first country globally to launch a 2030 women strategy. This was followed by 2018 being declared the “Year of Women” in Egypt.

Pushing for Gender Parity, the Ministry of International Cooperation launched the “Closing the Gender Gap Accelerator” Action Plan in collaboration with the National Council for Women, the World Economic Forum, and the private sector.

The Action Plan lays down four key objectives: to close gender gaps in remuneration, advance more women into management and leadership positions, increase women’s participation in the labor force, and hardwire gender parity in the future of work post the COVID-19 pandemic.

Al-Mashat shared that the “Closing Gender Gap Accelerator” intends to push for more participation of women, especially in leadership and decision-making positions.

There are around 34 projects, worth $3.3 billion being executed in Egypt to achieve the targets of gender equality, with the top targeted sectors including Health (20 percent), Micro, Small and Medium-sized Enterprises (MSMEs) (15 percent), and Education (14 percent).