“Egypt’s government is on a mission not only to ‘think green’ but also ‘act green’ in all policies..." the article notes 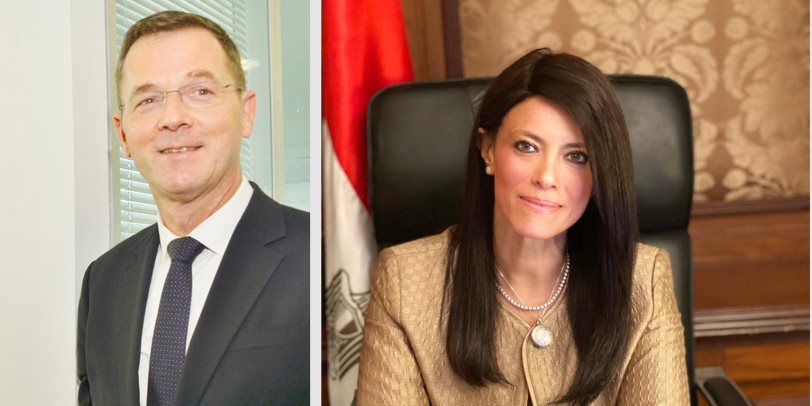 Minister Rania Al-Mashat, Minister of International Cooperation, and Sérgio Pimenta, Vice President of the Middle East and Africa at the International Finance Corporation (IFC) publish joint article in the Financial Times regarding on Egypt’s Leading Efforts in Green Economy.

Published on the Financial Time’s FDI Intelligence platform, Al-Mashat and Pimenta discussed the details of Egypt’s green recovery, and the efforts and policies applied by the government.

The Ministry of International Cooperation (MoIC), in partnership with the private sector, has been working to move the country towards a green economy, part of the framework of the first pillar of the Economic Diplomacy: Multi-Stakeholder Platforms.

Through this, MoIC is looking to promote Egypt's development stories and international partnerships implemented with multilateral and bilateral development partners.

“Egypt’s government is on a mission not only to ‘think green’ but also ‘act green’ in all policies and projects to help preserve the environment and bring sustainable energy to the country's population,” the article states.

Egypt has become a leading country in the Middle East and North Africa (MENA) region in terms of transitioning towards a green economy by promoting a clear strategy headed towards renewable energy and environmentally friendly projects, wrote the article.

It added that the Egyptian model is an inspiration for emerging countries and countries undergoing development transformations, according to the Solar Energy Outlook 2020 report.


The Largest Solar Park in the World: Benban Solar Park

The article mentions one of Egypt’s most well-known green projects is the world’s largest solar power park.

“Benban, which is so large it is visible from space, is the biggest signal yet of Egypt’s commitment to clean, sustainable energy, and a testament to the power of partnership between the public and private sectors,” says the article.

The Benban Solar Power Park project was created through the cooperation of the Egyptian government, the private sector and international financing institutions.

The park includes 6 million solar panels on an area of 36 square kilometer, and has been implemented by over 40 companies from across 12 countries.

The solar power park generates 1,500 megawatts of energy, enhancing Egypt’s sustainable energy strategy, supporting the use of clean energy, reducing climate change, and reflects the government's strong commitment to the transition towards a green economy.

The article added that “the park is optimizing the price of energy, strengthening Egypt’s energy mix, adding more local resources and will help avoid millions of tons of greenhouse gas emissions; it also created thousands of jobs, boosting Egypt’s economy”.

The Benban Solar Energy Park supports SDG 7: Affordable and Clean Energy, SDG 8: Decent Work and Economic Growth, and SDG 17: Partnerships for the Goals. This project also curbs the greenhouse gas emissions and creates jobs that promote the growth of the Egyptian economy.

The commitment to transition towards a green economy is no longer merely an idea or vague concept, there are clear plans and action policies working to enhance the sustainability of the energy sector in a way that reflects positively on citizens and in a way that also meets the excess demand for energy in light of the population increase, said a separate official statement.

This is done through the 2035 Integrated Sustainable Energy Strategy that aims to produce 42 percent of the country’s electricity from renewable energy.

With the issuance of the Renewable Energy Law No. 203 of 2014, the government has created initiatives to encourage the private sector to join the renewable energy field to support the country’s green transformation strategy.

KarmSolar Company, the first private sector company specialized in energy production, was established as a result of the initiatives, which has enabled to position itself as a leading country in MENA in terms of renewable energy.

The Al Mahsama Water Reclamation Plant in the Sinai Peninsula region is another project and step towards supporting green recovery, as the largest plant for treating agricultural wastewater in the world that the minister and VP mention in the article.

The plan has enabled the state to irrigate 70 thousand acres of agricultural land through one million cubic meters of water per day, creating thousands of jobs and promotes community development.

Complete transformation towards a green economy has its challenges.

It requires sound regulatory frameworks, long-term sources of financing, strong partnerships between countries and international financing institutions, and a clear government that is committed to the implementation of reforms.

During the past year, the Egyptian government approved the implementation of 691 environmentally friendly projects, including the electric train in Cairo and many renewable energy projects.

The country has also began issuing ‘green star certificates’ for hotels that implement environmental compliance policies, and succeeded in offering the first green bonds in the MENA region with a value of $750 million to finance the implementation of environmentally friendly projects.

To enhance green recovery efforts, the Ministry of International Cooperation holds strong partnerships with multilateral and bilateral development partners, and the partnership with the IFC in particular is a unique model, as it is one of the institutions contributing to the financing of Benban’s Solar Power Plant implementation.

The Ministry of International Cooperation conducted a match between the development funds of the IFC provided to the private sector in Egypt with the United Nations Sustainable Development Goals (SDGs) for the first time at the level of the countries of the region, where the volume of development funds from 2016-2019 amounted to $2 billion, 44 percent of which are directed to SDG 8: Decent Work and Economic Growth and 38 percent are going to SDG 7: Affordable and Clean Energy.

Why Are We Shifting Towards Green?

Shifting towards a green economy brings many benefits to different countries, as it is the path towards a more flexible and sustainable future in Egypt, and all other states in the region.

This also creates an environmentally friendly, and a more sustainable and less polluted region. It also pushes the economy towards a flexibility that can bear external shocks and adapt, thus becoming resilient.

“Essentially, rebuilding an economy in a green way makes not only for a cleaner environment—it also saves costs and makes the economy more robust and resilient to external shocks,” the article states.

The government’s strategy in shifting towards a green economy also attracts investors from the government and private sector to create job opportunities and have an optimal utilization of resources. In that sense, Egypt seeks to utilize all efforts in accelerating the transition to a green economy.

The IFC estimates that fulfilling climate pledges and transforming the green economy in Egypt, Jordan and Morocco requires smart investments worth $265 billion until 2030.

“Cities in these three countries alone could attract billions in investment in green buildings, public transport, electric vehicles, waste solutions and renewable energy,” the article added, “To harness this potential, governments must ensure a conducive regulatory environment that encourages investment, both foreign and domestic”.

As published in the annual report titled “International Partnerships for Sustainable Development: Writing the Future in a Changing Global Dynamic”, the Ministry of International Cooperation secured $9.8 billion in development financing; $6.7 billion secured for financing sovereign projects and $3.191 billion in support of the private sector.