El-Sisi highlighted Egypt’s eagerness to strengthen the two countries’ bilateral relations, and the US administration’s aim of expanding existing strategic coordination and consultation between the two 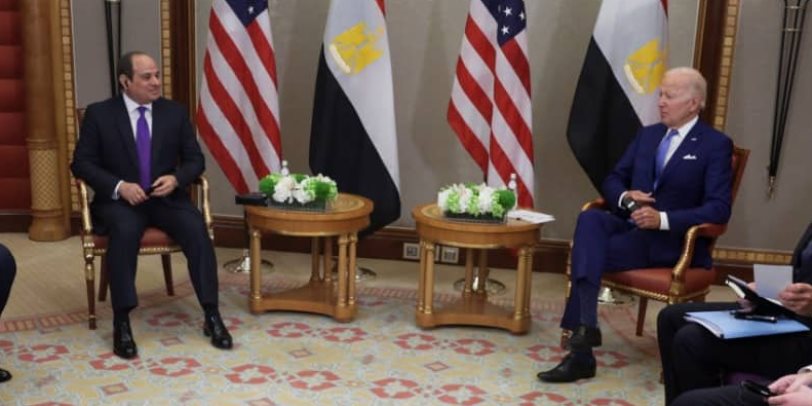 Presidents Abdel Fattah El-Sisi and Joe Biden met for the first time today since the latter’s inauguration as US president in January 2021 within a framework of establishing stronger joint cooperation on several fronts.

Meeting on the sidelines of the Jeddah Summit for Security and Development in Saudi Arabia, the two discussed bilateral cooperation between Egypt and the United States in multiple sectors, particularly the impact and repercussions of the pandemic and Russia-Ukraine conflict on food and energy security.

El-Sisi highlighted Egypt’s eagerness to strengthen the two countries’ bilateral relations, and the US administration’s aim of expanding existing strategic coordination and consultation between the two, pointing out the relations’ importance in promoting peace and stability in the Middle East region.

The meeting included discussions on the Ethiopian Dam dispute, with the Egyptian president emphasizing Egypt’s firm position on the necessity of reaching a legally binding agreement on the filling and operation of the dam; one that will preserve Egypt’s water security and supports the common interest of all 3 involved countries (Egypt, Ethiopia, and Sudan).

On Friday, Biden revealed that he would meet with the heads of state of nine Middle East countries on Saturday to discuss investing in the infrastructure sector.

Egyptian Presidency’s Spokesman Bassam Rady said El-Sisi’s participation in the Jeddah Summit comes within the framework of Egypt's keenness to develop partnership between the Arab countries and the US in a way that meets the aspirations and interests of current and future generations of the peoples of the region.