The grants aim to improve Egyptians’ standard of living, as well as promote development in many vital sectors, said Christian Berger, ambassador of the European Union in Egypt 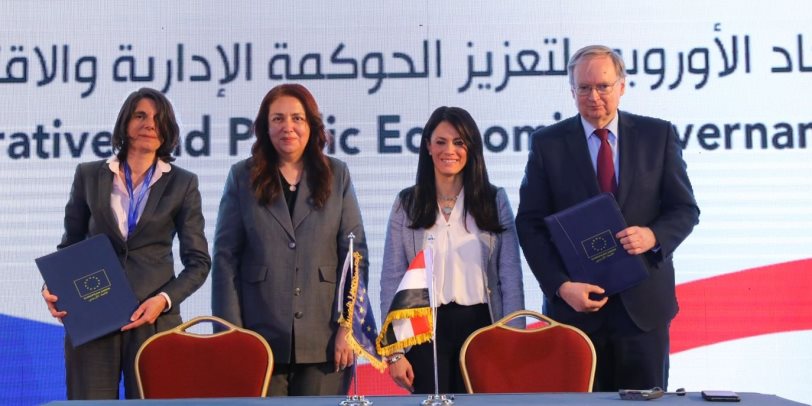 The grants aim to improve Egyptians’ standard of living, as well as promote development in many vital sectors, said Christian Berger, ambassador of the European Union in Egypt.

The EU has provided €650 million in grants for various development sectors since 2008, contributing to the provision of €7 billion in concessional financing provided by European financial institutions and member states of development banks, explained an official statement.

During the signing, Minister of International Cooperation Dr. Rania A. Al-Mashat highlighted the importance of strategic relations between Egypt and the EU, and in moving forward by strengthening cooperation within the framework of the 2021 - 2027 Cooperation Strategy.

Attending the signing ceremony were Minister of Environment, Dr. Yasmine Fouad; Chairman of the National Bureau for the Implementation of the Egypt-EU Association Agreement, Ministry of Foreign Affairs, H.E. Omar Aboueish; the President of the Central Agency for Organization Administration (CAOA), Dr. Saleh El Sheikh, with a number of representatives from ministries, ambassadors of EU member states, and development partners.

The Sustainable Development Strategy and the Administrative Reform Plan was also provided a €5 million grant to support the Ministry of Communication and Information Technology and the Central Agency for Organization Administration (CAOA). This is within the

It also included the signing of the “EU Support to Enhanced Administrative and Public Economic Governance in Egypt” program’s framework, which will be executed through the Organization for Economic Co-operation and Development (OECD).

The project “Decentralization and Integrated Local Development with a Special Emphasis on Upper Egypt” was also signed, worth €7 million in grants, within the framework of “EU Support to Enhanced Administrative and Public Economic Governance in Egypt”, which will be implemented through the United Nations Development Program (UNDP), in support of the Ministry of Local Development. A €14 million grant for the “EU Green - EU Support for Growth through Egyptian Environmental Networks” program was also signed, and will be implemented through the GIZ, to support the Ministry of Environment.

This is in addition to the €3 million grant for the Community Development Program between the EU and the Agence Française de Développement (AFD) for the Micro Small and Medium Enterprises Development Agency (MSMEDA). Moreover, the disbursement of the second tranche was announced to support the budget, worth €80 million in grants to support the Ministry of Health and Population, explained the statement.

In her opening speech, Al-Mashat emphasized the importance of the strategic relations between Egypt and the EU, which comes within the framework of the country’s development cooperation relations with multilateral and bilateral development partners; supporting efforts to achieve sustainable development, and to promote inclusive growth.